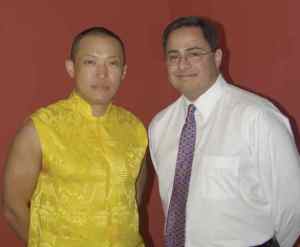 Me and Sakyong Mipham in 2006, just a week after I wrote the column.

If it seems like I’ve stopped posting here — it’s been long enough that the WordPress default font for writing drafts apparently has changed — really I’ve just been moving and wrestling with what I want to and am going to do next, which impact my thoughts and emotions and so the content I create or revive and then post here.

This is a revival, from moving rather than wrestling. Having worked for a newspaper, a magazine publisher, and a book publisher I have a lot of boxes of magazines and books. One of my movers, a young man who lifts cities above his head nonchalantly while navigating stairs and listening to tunes on his iPod earplugs, described these boxes as “angry — those are heavy [I can’t write the noun here, but guess].”

Anyway, in one of those boxes was the Trends 2006 issue of New Age Retailer, now called Retailing Insight, the fourth of the seven issues published each year. I started flipping through its 208 pages. Oh, look: there are my wonderful, much loved colleagues in the magazine masthead and, in the table of contents, so many of my fantastic writers — Kim Perkins! Pat Wagner! Doreen Virtue! Linda Cahan! Jean Haller! And the late Ted Andrews and the late Brita Adkinson. 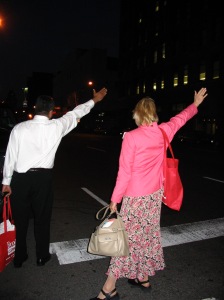 Me and Brita Adkinson hailing a cab after a long day at BookExpo America in NYC. Even though I’m from New York, Brita was much better at this than I was.

It doesn’t seem like so long ago. But friends have died.

It was one of those issues for which I wrote a lot of original copy. I ran long interviews I did with musician and sound healer Steven Halpern, Breathe Books store owner Susan Weis in Baltimore, and Moondance store co-owner Liz Gunn in Savannah, Georgia — Liz has since moved to Asheville, where I live — as well as pages of retailer surveys I analyzed and photo spreads from photographs I took at the main New Age trade show, INATS, also filled with familiar faces and memories.

What struck me most was my letter from the editor, though, because it was exactly my voice. Well, also because the photo of me that ran with it from just eight years ago looks more like it was taken 20 years ago.

But mostly because I was writing in exactly the voice I write with now and pretty much speak with now and think with now. I haven’t changed that much. And I wouldn’t change it that much: as I share it here, I’ll resist the urge for a minor edit or two — a few words I’d want to take away or amend, an extra paragraph break — but really there’s not that much I’d change. I’ll type it here, and then I’ll write a short postscript:

Me with Jack Klugman around this time. Because I can’t run this photo enough.

Letter From the Editor

Endings always bring me back to first things. For more than eight years I have explored various spiritual directions as a fringe benefit of my job. Lately, though, my thoughts have been drawn to the quasi-religious, rather than the spiritual, experiences of my childhood.

Ethnically and culturally Jewish, my two brothers and I were raised by atheist parents in a Long Island community that was largely Jewish and Catholic. My parents participated in the Ethical Culture Society and then became Unitarians. For my family, these groups were more social and political organizations — openly embodying what many religions are about in the United States — than spiritual ones. At the Unitarian church in Freeport (best remembered in a child’s mind’s-eye for a giant tree on its lawn) and the Unitarian fellowship in Huntington (the building, near Huntington Bay, looked like a castle), rationalist “Sunday School” in the 1970s meant political conversations about nuclear weapons or racial harmony, fun with woodworking, or demonstrative explanations about birth control: try this with a banana.

To be honest, I usually would rather have been home watching a ballgame or playing in one, but my mother, raised by ethnically Jewish atheists herself, would have none of it. Ironically, given her stark brand of atheism, she believed church gave needed structure to children’s lives. After my father’s death in 1973, church also gave dependable social structure to her, and, really, she didn’t want to go alone. During the holidays we would light a menorah, spin a dreidel, raise a Christmas tree, and hang stockings, all as warm, secular ritual.

When I got older, I found unvarnished Christianity and Judaism deeply engaging intellectually, starting in college — at the Jesuit school Georgetown University — and never stopping. When giving a presentation, I am as likely to tell a story about the Baal Shem Tov as not. Books by people like Father James V. Schall, G.K. Chesterton, Peter Kreeft, Rabbi Adin Steinsaltz, Rabbi David A. Cooper, and Martin Buber are mainstays on my reading list. I now am grappling with Gary Wills’ What Jesus Meant and Bart D. Ehrman’s Misquoting Jesus — as well as two books by Shambhala Buddhism leader Sakyong Mipham for an interview next week.

I am not a Christian, and I am a nonreligious Jew. I cannot explain easily my continual quest into these wellsprings of Western spirituality. They both have rich intellectual traditions that fascinate me endlessly.

Spiritually, by contrast, I resonate most powerfully with Eastern thought, with writers like Eckhart Tolle, with concepts of mindfulness, compassion, lovingkindness, being, and abiding stillness. The first cartoon I ran in the magazine quoted the Desiderata, and I indeed believe the universe unfolds as it should. My years working in this community and marketplace have helped center me. I have been strengthened and supported by the many paths to spirit I have been blessed to learn about and partake in.

I am stepping down as editor in chief of New Age Retailer. The International New Age Trade Show West in late June will be my last public event in the role. The explanation is simple: Active editorship of the magazine is very much a hands-on job, and my family needs to move to find better services and schooling than we can get locally for my 5-year-old son, Nicholas, who is autistic.

I leave the magazine in the capable hands of managing editor Kathy McGee and an outstanding staff. I will continue to contribute to New Age Retailer as editor at large — working with a columnist or two, penning the occasional feature, and serving as a resource, or at least providing institutional memory, for staff. I also will remain a director and trustee of the magazine’s parent company, Continuity Publishing.

Nonetheless, I recognize this transition as a significant ending, and so a goodbye: I have loved working at New Age Retailer serving the retailers of this marketplace. I deeply admire the work you do to facilitate people’s spiritual journeys and to improve the quality of their lives, including mine. Thank you for these great years.

Ray [as a signature image]

Me on the floor at the Javits Center

Well, firstly, I like that I got a chance to offer a goodbye: in life, you’re not always afforded that opportunity.

I suppose I’ve been sitting — sometimes comfortably, sometimes less so — for a time at a similar crossroads to the one I was at before making the choice I describe in that column, so it struck me especially deeply: Do I take a 5-year job to get my now-13-year-old son to adulthood? Start a business? Expand and give better definition to my extensive community work, transforming it into something resembling an actual job? Write more. Interview more. Do more good with greater consequence. Pay the rent. Questions and answers flowing fast, while all our worldly possessions remain stuffed in boxes that are stuffed in my living room and bedroom.

Well, with several sundry projects queued up, I’ll just do those first, and commit to posting on this blog at least once each week. We all start somewhere.

And then we all end up somewhere.

And then we look back, rarely but sometimes, and try to figure out what the heck happened.

I couldn’t quite find the little thumbnail pic that ran with the column on my old PC — maybe it’s on my old archival Mac, which barely functions and hasn’t been unpacked yet — so I instead inserted some 2005ish and 2006ish photos in the post, and then shot an iPhone photo of that little editor-in-chief picture. Here it is: Do you recognize this guy? And do I?

Well, I still have the shirt, anyway. 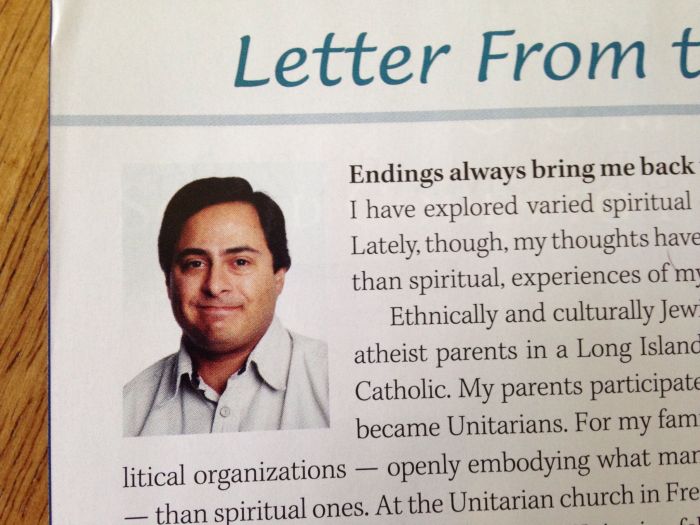