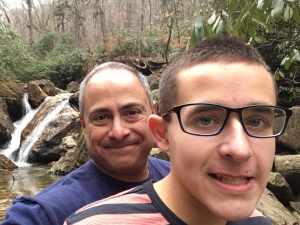 This year my son Nicholas started calling strangers by their names.

He looks at name tags and always tries to incorporate it into his hello or goodbye.

I use people’s names a lot. But spoken language is especially hard for some autistics, and it is work for Nicholas. He has a formal co-diagnosis of severe mixed expressive-receptive speech disorder. He is engaged in a game of translation and expression in language. He is figuring out what to say and when to say it and now even how to talk, which has become more laborious for him. He has, essentially, a tic on his vocal box between his vocal chords, and with that and since the onset of his Bell’s Palsy, his speech has become less intelligible.

When we’re out walking or hiking, too, Nicholas says hello to people as they pass by. Or, rather, I do, and Nicholas tries — he has learned it deeply — but often several literal and metaphorical steps behind the context and action. Sometimes people, hurrying along on their way or locked within their own lives, don’t even hear it or simply don’t acknowledge it or Nicholas.

Sometimes, too, they smile happily and engage.

Waiters and waitresses, as well: We practice and then Nicholas places his own orders at restaurants, sometimes aided by sentence starters from me. Often, the waiter or, usually, waitress then turns to me, because he or she doesn’t understand what’s being said and wants me to translate. Nicholas’ speech isn’t always fully clear, but really what’s going on is they are hurried and not listening well.

It’s agonizing in the moment when they turn toward me. It’s so disrespectful of Nicholas as a person and the effort he is making, and I think each instance of it causes him some injury. Often I re-prompt Nicholas in stages through the order, anyway, insistently, but sometimes I just place it myself, gauging Nicholas’ own response to the circumstance and doing whatever seems most constructive for him.

Tonight at Earthfare, a regional Whole Foods-like grocery store, we got salmon and watermelon, chips and limoncello squares and cupcakes. Our cashier, an older gentleman, fumbled with breaking out rolls of dimes in the register and took quite a while. He seemed to be struggling and a little stressed. Nicholas looked on.

As we left, several moments behind when someone else might have said it and as we were physically moving away, Nicholas looked squarely at the cashier, waved his hand briskly, and said in his now thick voice, “Goodbye … John!”

But, in our fast-paced world, John had already turned away toward his next customer.

Please share or like this blog piece using the social media buttons below. I also invite you to read some of my most popular articles about autism.