I interviewed Thomas Moore with a colleague and mentor — and now a good friend — in 1998; if I recall correctly, she was generous and wise enough, the latter in terms of personal and personnel development, to give me the byline. Moore, a former monk and a psychotherapist, has released 19 books, including the 2014 release A Religion of One’s Own, the best-selling Care of the Soul, and The Soul of Sex, the book he was promoting when we did the interview. It’s a busy day, so I’m not doing a full post here, but just putting up some idea-quotes from the interview worth engaging.

“I think probably the essence of sex is the coming together of differences, coming together in desire and pleasure. Empedocles, a Greek philosopher, said the whole world and all the things in the world are held together by Aphrodite, the goddess of sexuality — here’s a philosophy, the principle of Aphrodite, the spirit of Aphrodite. And at the same time he said what brings humans together in love and lovemaking is Aphrodite. So whatever it is that keeps the seasons coming and the planets in orbit and the oceans in place, birds flying south and all of that, it’s the same thing that draws people together sexually, to make love. And so it’s very hard to define what that is. But as I write about sex, I keep Empedocles in mind. Sex is very mysterious. It’s both cosmic and very personal at the same time.”

“What I’m trying to do is get away from what I think is a modernist philosophy that marriages are held together by good communication, by self-understanding and mutual understanding. I don’t think that’s true. You can have not much understanding at all and be quite mysterious. And what holds people together is more the passion and the mystery for something that has brought them together mysteriously — fate and circumstances and you recognize something. And what is desire, desire for another person and not for somebody else? It’s not something manufactured, and it’s not rational, and it’s not explainable.”

“People tell me we should try to get science and spirituality together. I’m not interested in that. I want to get out of the modern paradigm. I think it’s dangerous. It’s inhuman. There’s a tremendous loss of soul. I don’t want to build bridges to it. The modernist philosophy is self-destructive. We have made atom bombs, we pollute our nature entirely, we completely pave over our universe, we have absolutely no interest in beauty and other issues of absolute importance to the soul. I think it’s time to stop it. Individually, if enough individuals do it, maybe the culture will see it and move out of it.”

“I’m writing about the soul, which is the deep down and often dirty part of a person’s life and fantasy life and emotion. It’s not clean at all. Sometimes just because I use the word ‘soul’ it’s put into a context that’s very foreign to me, that is too sweet and too positive. I see a great deal of value in those darker parts of life, in the darker elements, and we should not try to clean it up. … I see a lot of books on shadow, but they don’t really honor the shadow. They try to get out of it cleverly. That really weakens our work when we do that. So something like jealousy — it’s a human thing to be jealous. You have people murdering each other out of jealousy, and it becomes insane just as anything can. You can murder someone out of greed — that doesn’t mean the desire for money is bad. But if it gets out of hand, it can reach psychotic levels and be very dangerous. I think it’s very important to see through the sentimentality — too sweet, too positive, too transcendent.” 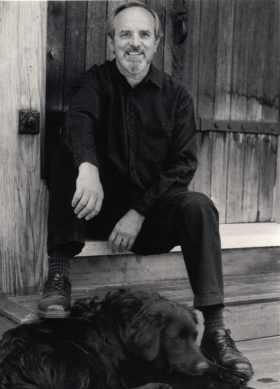 “People say that I don’t advocate absolute moral values, that I’m recommending moral relativity, anything goes. And that’s so foreign to me I can’t understand that, because what I’m trying to do is deepen our appreciation, in this case of sex, or anything for that matter, so that we are more ethical, not less. And the ethics is more deeply rooted instead of just being a lot of talk about being ethical without really being ethical, or just following someone’s idea of what’s right or wrong rather than struggling through your whole life to find out what fate is demanding you to do and not to do. It’s far beyond simple right and wrong. I think the emphasis on absolute moral values is a defense against really living ethically.”

I invite you to read and share the assortment of interviews posted on this blog, among them:

Pop! Tree, no filter …
• Support her • Foster her strength • Honor her power • Revel in her wisdom • Be there for her • See her vision too • Arm her with freedom • Stand up for her • Champion her dreams • Let her decide • Hold her in love •
Blue sky: look up.
Hidden corners of Asheville NC: drop a comment if you’re local and you know where I found this!
Fallen and falling #leaves #autumn #color #colorful #colors #instagood #instadaily #igers #fall #photooftheday #today #walk #picoftheday #bestoftheday #asheville #northcarolina #828isgreat
My son Nicholas, reflective or woozy after endoscopies this week in Charlotte.
Rosette Window, leaded stained glass, from the Meditation Room in the old Ivey’s Department Store in Charlotte, North Carolina, now one of many treasures sprinkled throughout Levine Children’s Hospital
#shell #reflection #beach #ocean #photooftheday #picoftheday #bestoftheday #instagood #instadaily #igers #spiral #fibonacci
Look #eyes #son #look #mask #love #tired #instadaily #igers #photooftheday #today #picoftheday #instagood
Loading Comments...
%d bloggers like this: