Racial and ethnic identity inform so much in our culture. The question asked really is a question of identity. “What are you?” masks the underlying question, “Who are you?”

American history and family history confirmed this identity. One drop. My parent’s mixed marriage: they were married in New York City, where they both were born, by a prominent NYC African American judge, Hubert Delany, brother of the Delany sisters who became famous decades later. My parents’ marriage was reported in the black press in papers up and down the East Coast. 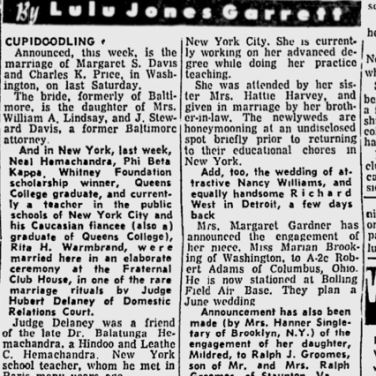 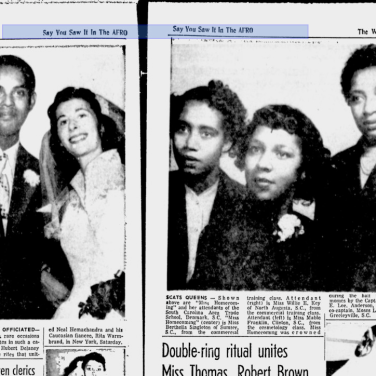 Still, my perception of how people saw me expanded: When I lived in D.C. attending Georgetown and then in Chicago, especially, out in the community people would frequently start speaking to me in different languages: Spanish, often—I really should have taken Spanish instead of French in high school and college—but also Greek or Italian or tongues unknown. Asian Indians, noting my surname, would often inquire if I was from India.

And as I moved away from cities—to Bellingham, Washington, for a dozen years and then in 2006 to Asheville, North Carolina, where race and blackness are seen through an entirely different regional prism that’s still largely inaccessible to me as a concept or even a feeling—my identity of blackness became increasingly a claim of blackness that was sometimes received skeptically or critically.

In addition to the change of locations, which continues to be consequential, during the past decade the concepts and tags multiethnic, multiracial, and transracial have been increasingly introduced and become influential across the culture.

Here’s a change I’ve made:

The former construction, a language long fought for by parents and some professionals, says my child is a person first, and autism is just one part of who he or she is or they are. It’s not the defining aspect of her, his, or their personhood.

I now use identity-first language because it seems to me a community should be able to name itself—autistics get to name autistics, regardless of the opinion of autism professionals or parents of autistics—and I have yet to meet an autistic adult who doesn’t prefer identity-first language (even as some are not overly concerned about it). You can read a fuller exploration of this issue by Lydia Brown of Autistic Hoya here or a short, seminal indictment of person-first language by Jim Sinclair here.

All of which he’ll just have to accept as part of his identity.

And I wonder, too, if someday decades from now acceptance and understanding of the ideas of neurodiversity and a neurodivergent spectrum might become so common, and that a prescriptive goal of neurotypicality might become so outdated, that the term autistic as a population-cluster definition starts to outlive its usefulness and the autistic identity starts to fray.

If you enjoyed this article, please share a link to it on your social media channels to spread the word or leave a comment below. You might also like to read another very personal piece about race:

As well, I invite you to read other posts I’ve written about autism, intellectual disability, neurodiversity, and my son Nicholas, including:

Mushrooms ‘round back outside of Centreville Luncheonette in Weaverville NC
Little forest stroll on Sunday
All the fungus, all the feels
When the light hits just right—in Pisgah National Forest today.
Profile of my son Nicholas, 21 and turning 22 next month, a joy the whole way through, in north Asheville NC today
It looked to me like a French impressionist painting … or a jigsaw puzzle.
Gardening season
The Macon Reed @macon_reed_studio installation “Hello Death, Where Have You Been All My Life?” opened this weekend and runs through Sept. 16 at the Center for Craft @centerforcraft at 67 Broadway in downtown Asheville, North Carolina. Macon Reed is a New Orleans-based artist, and NOLA cultural inflections about death and dying and our rituals around them color—literally and figuratively—the evocative, fabulous show. If you live in western North Carolina or are visiting, don’t miss it.
Loading Comments...
%d bloggers like this: